Member of the Quarter: Dave and Karen Richards

A.V.M.S is proud to recognize Dave and Karen Richards as our next Member of the Quarter. "The AVMS is very fortunate to have you as members." says AVMS Commander Jerry Hufford. "Your story below tells us of your life-long dedication to our great country. Your hard work and base connections helped to make last year’s Operation Thanksgiving a huge success." 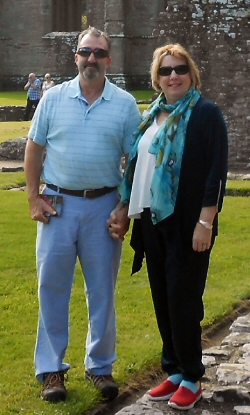 Member of the Quarter Karen and Dave Richards met under unique circumstances. In November of 1982, they met for the first time during a pre-arranged group blind date. Although Dave was late - and it would be a pattern never to change - it was the start of their lives together.

Karen was working in Providence, Rhode Island as a Dental Assistant. Dave was attending Submarine school in Groton, CT, his final training as part of the Nuclear Submarine Officer program. Dave had graduated from Virginia Military Institute back in spring of 1981. Neither realized this was the start of their life as a military family. Karen quickly learned the challenge of Submarine Navy life. Dave would be away over 40% of their dating time. She was able to send only 4 messages of 40 words each over Dave's 3 month at-sea deployments. This included the period where she planned their wedding alone.

Karen and Dave were married in October 1985, as Dave was soon to rotate off the USS Groton to shore duty. Now they started their family together. Following shore duty, Dave was assigned to the USS Alexander Hamilton - a nuclear ballistic missile submarine - that was stationed out of Holy Loch, Scotland.

After moving to Washington state and back to Rhode Island, building two houses, having 2 sons, Karen's career as well, and spending over 1000 days apart since they first met, Karen and David left active duty after 12 years. However, their relationship with volunteering and the Navy would not end there.

Another son was born to the family, as Dave was now serving in the Naval Reserves. They both were involved with their sons’ Little League teams, and as leaders in the Cub Scouts. Their 3 sons Evan, Aaron, and Ethan would follow in the footsteps of their father and uncle with all 3 earning the rank of Eagle Scout. Karen was also involved with the school PTO, and various school projects. The family always believed that travel and our country’s history were important. The family visited places like Disney, the Grand Canyon, Yosemite, Gettysburg, Valley Forge, and Philadelphia. Later, as the boys became adults, Karen and Dave were fortunate enough to travel to the Carribean, England, Wales, Ireland, Germany, Poland, France, and Italy.

In 2011 Karen and Dave formally retired from military service. Dave retired at the rank of Navy Captain with 30 years of service, having served the last 18 years in the Reserves in units such as Submarine Repair, Space Warfare, and Military Sealift. After some years as empty nesters, Karen retired from her job as a medical office coordinator and Dave as a manufacturing Supervisor in the biotech industry moving to Del Webb in 2019. Their sons live in Rhode Island, California, and Hawaii.

Del Webb Lakewood Ranch Association of Veterans and Military Supporters welcomes you to our website.


As our Del Webb community started to develop in 2017, a small group of residents had the idea to start a group to support our military, their families and our community.


Although we're still growing and developing, we already have a couple of years of meaningful, successful events that have touched many lives. We will continue to grow with our community's support.


Our dedicated group of men and women finds ways to support our active soldiers, their families, and military retirees in need, while ensuring that our community never forgets what our troops do for us.

Please help us to make this resource a tool for all our active members, potential new members, and our Del Webb community by giving us feedback on what you like and what could be improved.

It's easy! You can use the link below to pull up the instructions and application form or just go to the next meeting and talk to any A.V.M.S. member about joining our proud organization.