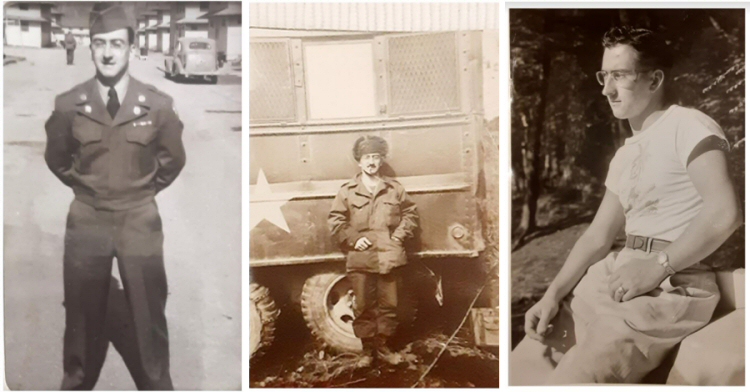 John Russo is the father of Del Webb’s own Mary Russo and father-in-law of Randy Ziemienski.

John was not only a WW2 Veteran, but also a Korean War Veteran being drafted twice, due to length of service, in 1946 and again in 1950. On his first tour, John served in Japan in 1947, then in Korea in 1951. Already having an electronics repair background, John was selected to be a Radio Repairman, training for 24 weeks in New Jersey. Following his discharge from Fort Devens in 1952, John, already married and with one daughter, quickly used his military training and experience and began what would become a life long career as an electronics engineer. John did research, design and testing of communication products at Raytheon, New England Telephone and Bell Labs. John has been spending much time in Del Webb with Mary and Randy and we were honored to have him attend, and speak at our January meeting. Thank you for your service !! 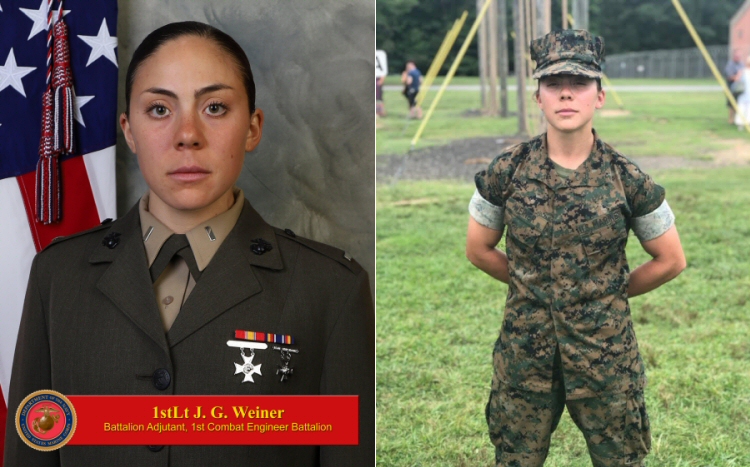 Lieutenant Jenna Weiner is the Battalion Landing Team Adjutant (BLT) for 2nd Battalion, 4th Marines. Her unit is also known as the “Magnificent Bastards”, one of the most legendary Battalions in the history of the United States Marine Corp. The BLT is currently in support of the 13th Marine Expeditionary Unit.

Son of Jim and Kathy Moran.

In John Moran’s own words: “I was stationed at Fort Drum NY from 2006-2009. I was assigned as an Infantryman to 2d Brigade Combat Team 10th Mountain Division, (2-10) more specifically 3d Platoon 1st Squadron 89th Cavalry Regiment (3A 1/89). Little did I know but 2-10 was the most deployed brigade during the Global War on Terrorism (GWOT). My brigade deployed to Iraq in the summer of 2006 as part of Operation IRAQI FREEDOM, and was assigned to an area right on one of the runways of Baghdad International Airport (BIOP), Camp Striker. My main responsibility was as my platoon’s lead Humvee gunner. My units’ main responsibility was to ensure local nationals and coalition forces freedom of movement along Route Tampa (Highway 1). Some other responsibilities were to conduct Key Leader engagements, raids for both enemy personnel and weapons, providing medical care to remote villages, route and area surveillance and finally, base security. We also were able to open up schools and register Iraqi people to vote. My brigade was the first Active Duty unit to spend over 12 months conducting combat operations since the Vietnam War as the President surged forces in Iraq. I returned to the United States in November of 2007 and trained for additional deployment(s). I received an honorable discharge and several Army awards in 2009.” 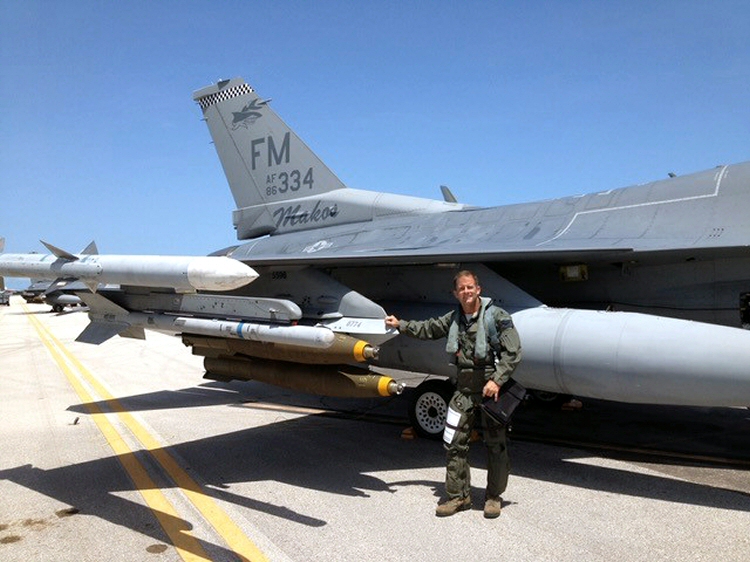 Bill Shea, son of Sherrol Shea, retired from the U. S. Air Force as a Lt. Colonel in 2019 after 25 years of service. After graduating from the Air Force Academy in 1993, he served as an active duty Logistics Officer at Langley AFB, VA, Bolling AFB in DC, and in Kuwait over 5 years before F-16 pilot training with the Fort Wayne, IN National Guard.

He was a NATO exchange pilot with the Norwegian Air Force in Bodø, Norway from 2003 – 2005 which required 6 months immersion in the Norwegian language. His deployments as an F-16 pilot included Saudi Arabia, Djibouti, Africa, and several times in Iraq and Afghanistan.

He received MBAs from Columbia University and London Business School during his time in the Air Force and makes his home in Tampa with his wife, Andrea. He works in International Business Development with Lockheed Martin in Orlando. 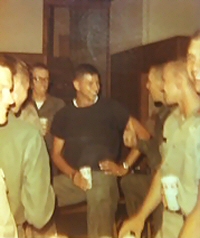 1LT Robert E. Hoy was the senior TAC officer charged with leading 50 raw officer candidates through the rigorous six-month-long Engineer OCS program at Ft. Belvoir, VA.  He was an inspirational leader — tough and fair.  He stressed the program’s academics, led a demanding physical fitness program, and he always stressed that – as officers – we must put the welfare of our men above all else. Before graduation, the class hosted Lieutenant Hoy at a beer party where his stern face and demeanor disappeared, as he revealed his true friendly, engaging self.

Several months later he received his orders to go to Vietnam.  By that time, he was a Captain and was assigned as CO of a combat engineer company near My Tho south of Saigon. He had been in-country only 24 days when one night his location came under a VC mortar attack.  He was mortally wounded, but refused medical assistance, directing the medics to care for his wounded troops.  Captain Hoy is buried in Arlington National Cemetery, and his name appears on the Vietnam Veterans Memorial in Washington, DC. He was 24 years old. Capt. Robert E. Hoy U.S. Army Corps of Engineers KIA RVN 04/27/69. 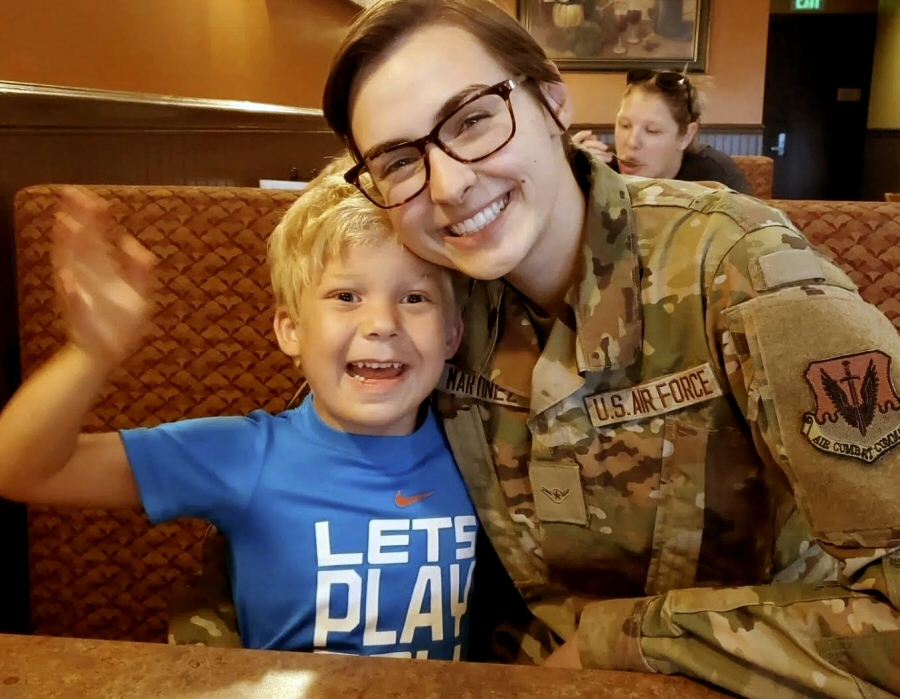 Proud Grandpa Herman Martinez shares with us his granddaughter: Airman First Class Mikyla Martinez, visiting with her little brother Cage while on leave.

Mikyla is presently stationed at Shaw Air Force Base in South Carolina. She graduated first in her class and is serving as an Aerospace Propulsion Specialist.

If you have a family member that is currently an active duty member of any branch of the military, please take the time to tell us about him/her. This information will be placed on the AVMS website under Jerry Hufford’s Wall of Heroes. Please send your details via email to AVMS Vice-President John Bastiani: jpbbluez@gmail.com