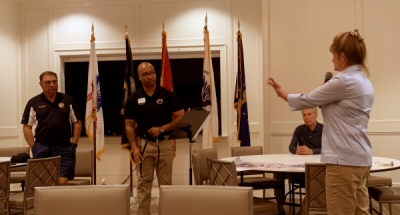 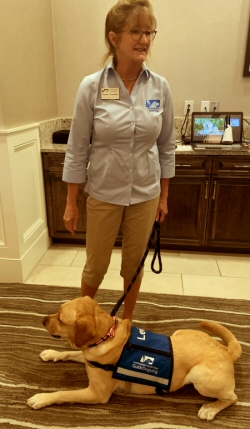 Southeastern Guide Dogs’ ambassadors Karen Conkel and Sean Brown were the featured guest speakers at our April 2019 monthly meeting. Conkel, with her Ambassador dog Levi, discussed how SGD transforms the lives of their clients, while Brown shared how his service dog Pella positively affected his post-war life.

Conkel is especially drawn to helping veterans since she comes from a family of those who have served. Conkel stated, “I’m grateful to live in the land of the free because of the brave.”

She described how Southeastern Guide Dogs carefully partners clients with their dogs to ensure the dog and client are a perfect match to best meet the needs of the client. Once paired, the team spends 11 days on campus at SGD – all free of charge to the recipient – where they start the important bonding process.

According to Conkel, it takes about $60,000 to raise and train each service dog.

A non-profit organization formed in 1982, SGD trains dogs of the highest pedigree. Placing over 3,100 guide and service dog teams since its inception, SGD has 750 volunteers and 350 puppy raisers who keep the puppies until they are 1 year old. During the time with the foster families, the puppies are exposed to as much as possible to prepare them for their role as a guide dog. Southeastern Guide Dogs are matched with veterans with disabilities, those who suffer from vision loss, and, via their Gold Star Program, children with significant challenges such as the loss of a parent in the military.

It’s important to note that SGD does not receive any government funding and they do not charge their recipients for the dogs. They operate totally on private funding and donations. A donation of $5,000 enables a benefactor to support and name a dog. 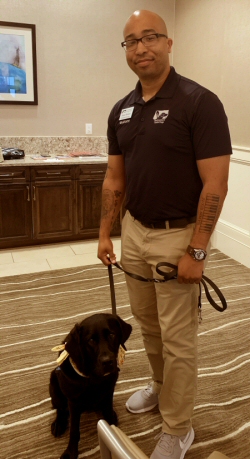 Guest speaker and retired veteran Sean Brown and his service dog Pella (sponsored by Pella Windows and Doors) were matched over 1 year ago. Sean describes the amazing affect Pella has in his life. “Pella transformed my life. She gives me the freedom to live my life with the confidence I once had. I am healthier physically and emotionally and it is all due to Pella.”

Brown continued, “She is my family. I have her back and she has mine. SGD changed my life in a way I didn’t think possible.” Brown refers to Pella as his “Battle Buddy.”

Sean now works for Southeastern Guide Dogs. In his role he connects with veterans one-on-one to help them with their own transition process.

Southeastern Guide Dogs has multiple volunteer opportunities, which include:

Monetary donations can be made via the website: guidedogs.org.

Contact Southeastern Guide Dogs at 941-729-3647 for a tour of the Puppy Academy and Veterinary Center, Canine University Residence Halls and the Student Center, where people with vision loss and veterans with disabilities live for several weeks while learning to navigate with their new dogs.